If you wish to buy a new smartphone, or wish to upgrade to perhaps a different make, then what is the better option? Android or iPhone? This very much depe 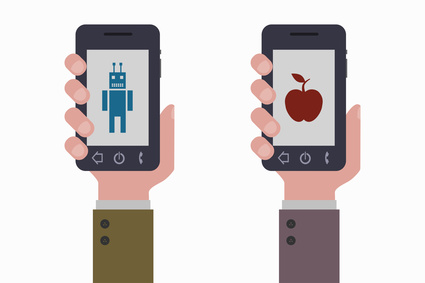 nds upon your budget, lifestyle needs and how you wish to use the phone. Below we offer a quick guide on the differences between the two and which may be best for you.

It now seems that apps become available at the same time, on both operating systems, as opposed to recent years. So, Android users no longer have to wait to download their favourite app. Both iOS and Android have lots of choice in their app stores and there doesn’t appear to be much difference regarding price.

The iPhone has always had a home screen that is not really customisable. You can put apps into folders, so as to better find them, but other thin this, you can’t really change the way that the home screen looks. Android phones work in a different way, as you are able to customise the home screen. You can leave the hone screen looking like that of the IPhone, displaying all of your apps, or alternatively, these can be placed into the app tray on your phone, leaving your home screen to display an image or widget of your choice.

Sync with other devices

We all use computers, laptops or tablet devices, in and outside of the home, so it makes sense to buy a phone that can sync with these devices. If you are an iPad or Mac user, then buy an iPhone, as this will sync effortless with these devices. On the other hand, if you own a laptop that is run by Winnows, then the Windows phone would be a wiser choice as you can sync all documents, photos and music to your phone.

If you want a budget smartphone then Apple is not for you. The only way you can buy a cheaper phone, is by buying second hand, and the latest models will still set you back upwards of £350. So, if you are on a tight budget, Android is your better option. Samsung, LG and Sony are all fantastic Android options.

Battery life plays an important role in your choice of phone. Usually battery saving energy functions are present on both Apple and Android phones, so that you can preserve battery life when needed. Android phones also feature a way for users to quickly charge their phones, something that iOS uses cannot do. Unfortunately, it does appear that iPhones drain more battery than Android phones.

Software and hardware is fully controlled by Apple, leading to a good support experience for the customer and less chances of downloading malware. Downsides include those of not having the ability to add extra storage, other than from the cloud, and a limit to how you can customise the phone. iPhones are also more expensive than Android phones.

Android phones are easy to customise and come with the ability to add extra storage if needed. There is a greater choice available and these phones cost much less than the iPhone. Downsides include those of a greater risk of malware, a lack of consistency with regards to the interface across different phones, and limited support.